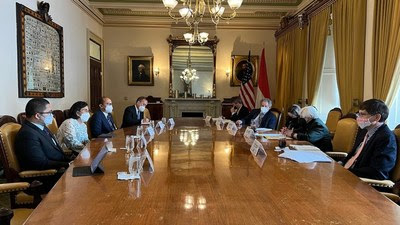 “(G20) members hope that the current geopolitical situation, particularly related to the war in Ukraine, will be handled,” Indrawati noted at a press conference of the second G20 FMCBG meeting on Thursday.

The expectation is based on the fact that the global situation has worsened and changed rapidly due to the COVID-19 pandemic, coupled with the Russia-Ukraine war, she remarked.

Moreover, the Russia-Ukraine war has a very dynamic implication, including on the energy, food, and fertilizer price hike, she affirmed.

Indrawati said Indonesia, which currently holds the G20 presidency, will continue to conduct intensive communication and consultations with all G20 members to address the very dynamic situation.

“The G20 good governance is actually based on consultations as well as cooperation,” she remarked.

Indonesia continues to hold discussions with all G20 member states to find ways to get out of the various global economic risks that result not only from the war in Ukraine but also from the pandemic, she stated.

The minister emphasized the current need for an exit strategy since several countries were under the threat of high inflation while the global energy and food price hike will increasingly create a challenging situation for policy makers.

According to Indrawati, G20 members are concerned about inflationary pressures that tend to prompt several central banks to raise the policy interest rates that will eventually lead to faster-than-expected global liquidity tightening.

Hence, the higher level policy becomes the focus to fulfill the exit strategy-related commitment that is well-calibrated, planned, and communicated to support recovery and reduce the potential impact of a spillover, she stressed.

The collective and coordinated actions are not only aimed at mitigating the impact of the Russia-Ukraine war but also at controlling the pandemic. The actions will remain high on the list of G20’s priorities, she stated.

G20 members have recorded an increase in the number of COVID-19 cases in several regions that burdened growth, extended supply disruption, worsened inflationary pressure, and slowed down global recovery, she remarked.

Caption: Finance Minister Sri Mulyani Indrawati met with the U. S Secretary of TreasuryJanet Yellen on the sideline of  the G20 2nd FMCBG Meeting on Thursday (April 21, 2022). Earlier, finance ministers of the United States, Canada, and the United Kingdom staged a walkout as a protest against the presence of the Russian delegation during the G20 2nd FMCBG Meeting organized under Indonesia’s G20 Presidency in Washington, D.C.